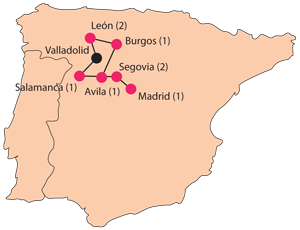 Day 2: Segovia
Land at Madrid Airport, meet your Teach By Travel tour manager, and transfer to Segovia. After your orientation briefing, free time to explore before dinner and overnight in Segovia.

Day 3: Segovia
Morning guided tour of Segovia, including the engineering marvel of the Roman Aqueduct, the Gothic Cathedral, and the spectacular Alcazar. Free time to stroll the twisting alleyways and pedestrian streets where no cars are allowed, surrounded by the city's medieval wall. Dinner and overnight in Segovia.

Day 4: Segovia - Salamanca
Transfer to Salamanca, rich in Renaissance architecture. Enjoy your guided tour of this university city, including the University of Salamanca, a masterwork of Plateresque style, the Universitary Hospital with its beautiful Renaissance court, the Renaissance Palacio Anaya, and more. Time to explore the 18th century Plaza Mayor, one of the most beautiful squares in Spain, before dinner and overnight in Salamanca.

Day 5: Valladolid - León
Depart this morning from Salamanca and stop at Valladolid, one-time home to Cervantes, and linked to some of the most important figures in Spanish history. Christopher Columbus died in Valladolid, Phillip II was born here, Isabella and Ferdinand were married here. Entrance included to the National Sculpture Museum, and its extensive collection ranging from the Middle Ages to the nineteenth century. Continue on to León for dinner and overnight.

Day 6: León
Guided tour of León, including the Hostal San Marcos - Parador de León, a magnificent building that was originally a hostal built to shelter the pilgrims on the Santiago Way. Visit the spectacular León Cathedral, a gothic cathedral built in the 12th century, Casa de Botines, designed in the 19th century by Antonio Gaudi and more. Free time to visit MUSAC, an impressive modern art gallery with exhibitions of well-known Spanish and international artists. Dinner and overnight in León.

Day 7: León - Burgos
Transfer from León and continue to Burgos, the city of El Cid, and a major stop for pilgrims on their way to Santiago de Compostela. Guided tour of Burgos includes the 13th century Gothic Cathedral, La Casa del Cordon, Puerta de Santa Maria, and Monasterio de las Huelgas, with its gothic chapterhouse and its Romanesque cloister, considered one of the most important monuments in Spain. Free time to explore on your own before dinner and overnight in Burgos.

Day 8: Burgos - Ávila
Depart Burgos, and journey to the Monastery of Santo Domingo, famous for its very old Romanesque cloister and the chanting of the Gregorian monks. Continue to the walled town of Avila, one of the finest remnants of Europe's medieval era, featuring Renaissance churches and palaces. Guided tour of Avila before dinner and overnight in Ávila.

Day 10:
Transfer to the airport for your return flight.