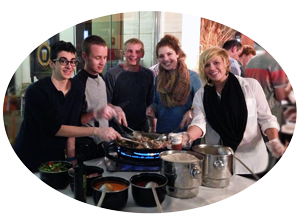 • Times Square, Rockefeller Center, Central Park
These three sights make up one of the most popular triangles in the world. All within walking distance of one another, they are three of the most visited places in NYC. This walking tour will take students to each location, showing specific highlights and pointing out well-known locations from television and motion pictures.

• Central Park
More than just a green space in the middle of Manhattan Island, it is an 843-acre oasis, 150 years in the making and a favorite retreat for New Yorkers. Your group will follow their guide on the park’s winding paths, over the bridges, through the tunnels, and learn how the architects Olmsted and Vaux created New York’s “backyard”.

• Times Square
The Great White Way – is located at the junction of Broadway and Seventh Avenue and stretching from West 42nd street to West 47th Streets. It got its name when the NY Times building was built there, long before it was a showcase of neon lights and jumbo digital screens, and the name has stuck ever since.

• Harlem Food Tasting and Sightseeing
Discover and rediscover Harlem. The tastings will be served on and off your coach transportation. You will be stuffed and satisfied with the equivalent of a full lunch serving.

• 125th Street, Harlem
The famous street is often considered to be the ‘Main Street’ of Harlem and is co-named Martin Luther King, Jr. Boulevard. Notable buildings along 125th Street include the Apollo Theater, the Adam Clayton Powell, Jr., State Office Building, the Hotel Teresa, the Studio Museum in Harlem, the Mount Morris Bank Building, and the Harlem Children’s Zone, among others. In the late 1990s, many sections of the street have been gentrified and developed with many retail stores, street vendors hawking their goods, and the Magic Johnson Theaters.

• Apollo Theater - no entry
This legendary venue is a noted venue for African-American performers. The Apollo grew to prominence during the Harlem Renaissance of the pre-World War II years. Billing itself as a place ‘where starts are born and legends are made,’ it became famous for launching many careers, including Ella Fitzgerald.

• Hot Bread Kitchen at La Marqueta, Harlem
Hot Bread Kitchen builds lasting economic security for low-income, immigrant and minority individuals by creating pathways to professional opportunities in the culinary industry. Hot Bread Kitchen’s retail storefront is located inside Spanish Harlem’s historic La Marqueta and just steps away from their production bakery in the back of the market. The kitchen bakes a full line of artisan and multi-ethnic breads and delivers daily to restaurants, caterers and retailers throughout New York City, New Jersey, Long Island, Westchester and Connecticut. A short Q& A will be arranged and samples.

Locally sourced ingredients go into season-fresh pies, cakes and cookies. Carefully considered fillings made from nature’s ripe bounty are poured into hand-pinched crusts before the tempting treats are placed into small batch steel ovens. Rows of near-to-bursting pies with golden brown crusts rest on cooling racks until they are snatched up to be taken home, consumed on the spot or shipped fresh nationally for next day delivery.

Tony winner Jessie Mueller (Beautiful) is Jenna, a waitress and expert pie maker in a small town who dreams of a way out of her loveless marriage. A baking contest in a nearby county and the town’s new doctor may offer her a chance at a fresh start, while her fellow waitresses offer their own recipes for happiness. But Jenna must summon the strength and courage to rebuild her own life.

Day Four:
Eight Hours with a licensed NYC Tour Guide – Brooklyn & Lower Manhattan
• Brooklyn Epicurious
Neighborhoods Food Tasting and Sightseeing Program
See and taste at four venues across several neighborhoods. You’ll enjoy panoramic sky-line views, street walks, free time for browsing/shopping, and – of course – classic conversations on ethnic diversity, changing trends, and anything else that seems timely and appropriate. Our venues include a chocolatier in DUMBO, famous Brooklyn Pizza, a trip to the Middle East and famous cookies. Some tastings will be served onboard the coach transportation.

• Museum of Food and Drink
MOFAD seeks to advance public understanding of the culture, history, science, production, and commerce of food and drink. The museum currently operates MOFAD Lab, an exhibit design studio and gallery space in Brooklyn. Supported by a diverse community of donors, volunteers, and partners, MOFAD is working toward a global center for learning with multiple exhibition galleries, program and workshop space, a garden, café, and more.

• Lower Manhattan
Explore where it all began – Lower Manhattan – or New Amsterdam. Walk back in time through history and rediscover the historic, political and cultural sites associated with the birth of New York and the nation. Highlights may include a combination of sites associated with Bowling Green Park (the city's first park); Battery Park (with views of the Statue of Liberty and Ellis Island); Castle Clinton (a former fort, immigration processing center, concert hall, and aquarium); the former United States Custom House; the Promenade overlooking New York Harbor, Hanover Square; the Great Fire of 1835, Fraunces Tavern; St. Paul's Chapel (the oldest church in Manhattan, it sustained relatively little damage notwithstanding its proximity to the WTC site and served as the heart of the massive rescue and relief effort after September 11, 2001); a view of the WTC site; Trinity Church and its graveyard, and a visit to the 9/11 Memorial.

• 9/11 Memorial
The 9/11 Memorial is a national tribute of remembrance and honor to the 2,983 people killed in the terror attacks of September 11, 2001 and February 26, 1993. Occupying eight of the 16 acres at the World Trade Center, the Memorial is a tribute to the past and a place of hope for the future.

• One World Observatory Entrance
Positioned on top of the tallest building in the Western Hemisphere, One World Observatory will provide unique, panoramic views of New York City from three floors (100, 101 & 102) from above 1,250 feet. One World Trade Center is104 stories high. The antennae on top will make it 1,776 feet high. And though the building is no longer called the Freedom Tower, that figure is not a coincidence.

*An additional hands-on culinary cooking experience with a professional chef will be added to this itinerary - TBD pending your departure date.

"This was the first trip that I even planned and after working with Sue to put my itinerary together, I found out that this was a simple process and I can't wait to do it for next year!"
-Melanie, DE