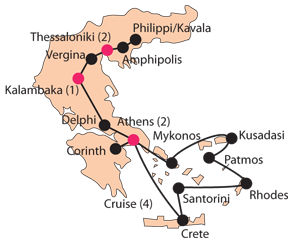 Day 3: Thessaloniki - Amphipolis - Philippi - Kavala
After breakfast, depart for Amphipolis and the Region of the Lakes Corinia and Volvi. Paul journeyed through Amphipolis on his way to Thessaloniki. Along the way, see the colossal Lion monument at Sunphipolis (5th century BC), then proceed to visit Philippi, site of the famous battle between two Roman Armies - “...from there we went to Philippi...” (Acts. 16: 12-18). Here you have the opportunity to follow the steps of Paul, Luke, Timothy, and Silas. Proceed to the city and the harbor of Kavala and enjoy fresh fish and a variety of delicacies. Return to Thessaloniki for dinner and overnight.

Day 4: Vergina - Kalambaka
Depart for Vergina to visit the excavations of the Royal Palace and Royal Tombs. Journey to the area of Kalambaka where the famous monasteries of Meteora are located. Visit the greatest and most important monastery of all, the "Great Meteoron." Perfectly preserved Frescoes of the 14th century, Icons offered by Byzantine Royal Dynasties, Ancient Manuscripts belonging to Royal Collections and Libraries are found here. Dinner and overnight in Kalambaka.

Day 5: Delphi - Athens
Put on your hiking boots! After breakfast, depart for Delphi. At Delphi take a short climb to the Sanctuary of Apollo Pythion, home of the "Oracle." This is truly a beautiful, mountainous site, as awe-inspiring today as it was to the ancient pilgrims. A little further up is the theater where town council meetings were conducted, and a little further, the amazingly preserved coliseum where games were held. Time to explore the museum here before continuing to Athens for dinner and overnight.

Day 6: Athens - Corinth
Guided city tour of Athens. See the Academy, the University and the Parliament with the Tomb of the Unknown Soldier. Continue to the Acropolis for a visit to the Parthenon and the Acropolis Museum. Visit the Areopagus on Mars Hill, site of Paul's address to "the men of Athens" about their "unknown God" (Acts 17). After lunch (on your own) board your coach and travel along the same route that the Apostle Paul took. Continue to Old Corinth. Corinth was an important place and congregation in Paul's odyssey (Acts 18 and Letters to the Corinthians) with its Temple of Apollo ruins set against the Acrocorinth, on which the Temple of Aphrodite was located. Corinth was the largest, richest, and most pleasure-loving city of Greece, so it gave Paul plenty of material for discussion when he came here in the 1st century AD. Paul worked here for three years with Aquilla and Priscilla. Return to Athens for overnight.

Day 7: Cruise - Mykonos
Embark on your cruise ship. Sail to the island of Mykonos with its breathtakingly beautiful whitewashed buildings and churches... a lovely respite.

Day 8: Patmos - Kusadasi
Early arrival at the Island of Patmos. Optional excursion to visit the traditional Grotto where John received the Revelations while in exile, and St. John’s Monastery atop the island. This afternoon, sail to Kusadasi. Paul labored and ministered here for three years, and famously spoke at the Library of Celsus. Optional excursion to visit ancient Ephesus, a marvelous archeological site and base for much of Paul's missionary work (Acts 19 & Letter to The Ephesians), Also see the reputed home of the Virgin Mary where John is said to have brought her.

Day 9: Crete - Santorini
Morning arrival at Heraklion, Crete, legendary home of the Minotaur. Optional excursion to view the Palace of King Minos and labyrinth of the Minotaur of Knossos. Afternoon sail to Santorini, perched on the rim of an ancient volcano and believed by many to be the site of the Lost Continent of Atlantis. Optional excursion available to Thira and Oia.

Day 10: Cruise - Rhodes
Morning arrival at Rhodes, home of the Colossus, one of the Seven Wonders of the Ancient World. Optional excursion to Lindos and its legendary Acropolis. Walk through the Medieval Castle of the Knights of St. John. Then visit Lindos, where Paul landed in 51 AD on his way to Rome, and the Acropolis of Lindos, site of the Temple of Athena.

"The trip was absolutely amazing - from soup to nuts. You and I will be working together again in the not too distant future!"
-Rob M, NJ