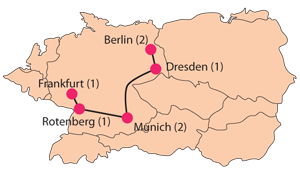 Day 2: Frankfurt
Arrive Frankfurt airport and meet your Teach By Travel tour manager. Orientation tour of Frankfurt before dinner and overnight in Frankfurt.

Day 3: Frankfurt - Heidleberg - Rothenburg
Board your motorcoach and transfer to Heidelberg, the city of the "Student Prince" for a sightseeing tour, including an inside visit to Heidelberg Castle. Proceed to Rothenburg, the most well-preserved town on the Romantic Road. Time to explore this charming city and its narrow cobble-stone streets. See the magnificent Renaissance Town Hall and Market Square, walk the Herrngasse, and view the picturesque high-gabled houses of this medieval city. Dinner and overnight in Rothenburg.

Day 4: Munich
Follow the Romantic Road to Munich, for a guided city tour. See the Marienplatz, Frauenkirche, Residenz Palace and more. Free time to explore, or take an optional excursion to Dachau. Dinner and overnight in Munich.

Day 5: Munich - Bavarian Alps Excursion
Gorgeous views of the German Alps today. First stop is the town of Oberammerau, home of the Passion Play. Time to see the colorfully painted chalets and the gigantic theater. On to the Wierskirche, a masterpiece of Bavarian rococo. Continue to the fairy-tale Neuschwanstein Castle, built by Mad King Ludwig. Return to Munich for free time before tonights's lively Hofbrauhaus Dinner with entertainment.

Day 6: Munich - Nuremberg - Dresden
Depart Munich and journey to the fortified city of Nuremberg. Though heavily bombed during World War II, Nuremberg still tells the tale of early German history. Time to explore the city and its medieval architecture before traveling to Dresden, located in a valley on the River Elbe, for dinner and overnight.

Day 7: Dresden - Berlin
Guided city tour of Dresden, the capital of Saxony. In the 18th century, Dresden was a center of artistic activity which produced many of its iconic buildings, including the Zwinger, the Frauenkirche, and the Hofkirche. Allied bombing during World War II destroyed much of Dresden, but considerable restoration work has helped reconstruct some parts of historic Dresden. Depart for the German capital, Berlin, for dinner and overnight.

Day 8: Berlin
Morning guided city tour of Berlin, featuring both East and West Berlin. See the remains of the Berlin Wall, the Soviet War Memorial, Unter den Linden, and more. Free time to explore on your own, or take an optional excursion to Potsdam for a guided tour of Sans Souci Palace. Dinner and overnight in Berlin.

Day 9:
Transfer to the airport for your return flight.

"The trip was amazing! Both kids and chaperones had a great time, and everything ran perfectly. Raquel was awesome, as usual. Thank you so much for everything you do for us. You make it so easy to enjoy these trips and we always have a great time traveling with your agency."
-Rachel S, NY