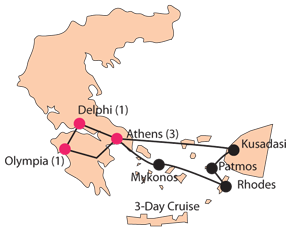 Day 2: Athens
Arrive at Athens airport, where your Teach by Travel tour manager will meet you and transfer you to your hotel for check-in. Dinner and overnight.

Day 3: Athens
This morning's guided city sightseeing tour of the Cradle of Civilization includes the Acropolis, the Parthenon, the Roman Agora, and more. Afternoon visit to the National Archaeological Museum - its abundant collections, with more than 20,000 exhibits, provide a panorama of Greek civilization from the beginnings of Prehistory to Late Antiquity. Dinner and overnight in Athens.

Day 4: Athens - Olympia
Depart Athens. Stop in Mycanae to visit the Lion Gate, and the Beehive Tomb of King Agamemnon. Continue to Epidaurus, the site of the renowned Amphitheater, said to enjoy perfect acoustics! Drive through the central Peloponnese to Olympia for dinner and overnight.

Day 5: Olympia - Delphi
Morning visit to the impressive Temple of Zeus, the Temple of Hera, and the Museum. View lush olive groves as you drive through the plains of Eliad and Achaia. Cross the Corinthian Bay and proceed to Delphi.

Day 6: Delphi - Athens
Morning tour of Delphi. Regarded as the center of the world and the dwelling place of Apollo, Delphi attracted 'pilgrims' from across the ancient world. Generals, kings, and individuals of all ranks came to the 'Oracle' of Delphi to ask Apollo's advice on the best course to take in war, politics, love and family. See the Temple of Apollo, dating from the 4th century BC. Also see the famous 'Charioteer' in the museum at Delphi. Afternoon return to Athens for time to shop in the Plaka, or climb Mt. Lycabettus for amazing views of the city. Enjoy dinner at a lively Greek Taverna, with entertainment.

Day 7: Cruise - Mykonos
Transfer to the port of Piraeus and board your cruise ship. Enjoy the on-board amenities, such as a swimming pool, and three meals a day! First stop is Mykonos, with its narrow cobbled streets, chic boutiques and white-washed houses. Time to stroll along the shoreline, enjoy the views from a sidewalk cafe, or take an optional guided tour, where your coach will take you to Hora, the island's capital. On to Alefkandra, a charming corner of Hora, known as the "Venice of Mykonos," as the houses are built on the sea, with wooden balconies that evoke Venice.

Day 8: Cruise - Rhodes
Full day today on the "Island of Roses". The capital lies outside and within the walls of a very well -preserved Venetian castle. Optional shore excursion of Rhodes and Lindos - drive along the south-eastern coastline to Lindos, a city guarded by medieval walls constructed in the 13th century. Within these walls stands the ancient Acropolis of Lindos, on the brink of a precepice 400 feet above the sea. Enjoy breath-taking views covering the great expanse of the Aegean Sea and St. Paul's Bay, and a guided tour of the Acropolis. Return to Rhodes for a panoramic drive through the new part of the city, before continuing on to see the ruins of ancient Rhodes, followed by a walking tour through the medieval city.

Day 9: Patmos - Kusadasi
Morning arrival at Patmos, site of the Monastery of St. John the Divine, who received the Revelations in the Sacred Grotto. An optional shore excursion takes you on a guided tour of St. John's Monastery. Visit the church and the small museum with its priceless ecclesiastical treasures, mosaics, icons, and splendid medieval textiles. Proceed to the Grotto of the Apocalypse to witness the spot where the Book of Revelations was received. Your cruise ship continues on to the lively Turkish port of Kusadasi. Wander through the bazaars, or take an optional guided excursion to see the house of the Virgin Mary and the ancient city of Ephesus. Transfer to a small valley where lies the humble chapel believed to be where Mary spent her last days. Continue on to the ancient port city of Ephesus. Your guided walking tour will take you through one of the most magnificent excavations in the world, including the Library of Celsus and The Great Theater.

Day 10:
Morning arrival into the port of Piraeus. Disembark and transfer to the airport for your return flight.

"The trip was amazing! Both kids and chaperones had a great time, and everything ran perfectly. Raquel was awesome, as usual. Thank you so much for everything you do for us. You make it so easy to enjoy these trips and we always have a great time traveling with your agency."
-Rachel S, NY