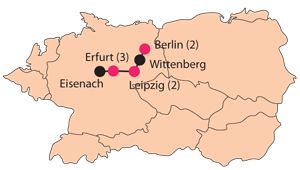 Day 2: Erfurt
Arrive Frankfurt airport, meet your Teach By Travel tour manager, and enjoy the scenery of central Germany as you transfer to Erfurt, which Martin Luther described as "in the center of the center" of Germany. Martin Luther attended the University of Erfurt and received his bachelor's and master's degrees of theology here. Luther lived here as a student from 1501 to 1511 and as a monk from 1505 to 1511.

Day 3: Erfurt
A local guide conducts a sightseeing tour of Erfurt, with its preserved and intact medieval city center. View patrician townhouses, half-timbered buildings, and Europe's longest inhabited bridge, Krämerbrücke, built in 1325 and covered with 32 inhabited buildings. Time to visit the Augustinian Monastery where Luther studied and lived. Free time this afternoon - you may wish to explore Erfurt Cathedral and Severikirche, which stand side by side and together form the emblem of the city.

Day 4: Eisenach Excursion
Day excursion to Eisenach, where Luther once lived, first in town at the Lutherhaus and later in disguise as "Knight George" in the Wartburg Castle. Your tour includes the Georgenkirche, where Luther was a choir boy and later preached, and Luther House where he lived as a schoolboy - the half-timbered house preserves the two rooms used by Luther and displays Reformation artifacts. See Wartburg Castle, where Luther lived in hiding as Knight George. Here he threw an inkpot at the devil and translated the Bible into German. Return to Erfurt for dinner and overnight.

Day 5: Leipzig
Morning transfer to Leipzig, for a tour featuring St. Thomas's Church, The Renaissance Old Town Hall, and St. Nicholas's Church, where Luther preached and Bach was the choirmaster! Leipzig became known throughout the world in 1989 as the starting point of the "peaceful revolution" which paved the way for the reunification of Germany.

Day 6: Eisleben - Leipzig
Journey to Eisleben for a guided tour of the town officially named Lutherstadt Eisleben in honor of its association with Martin Luther. Here Luther was born in 1483 and died in 1546. See Luther's birth house and death house, both now well-preserved museums. Also visit St. Peter and Paul Church, where Luther was baptized (the original font survives) and St. Andreas Church, a Gothic hall church where he preached his last sermons. Return to Leipzig for dinner and overnight.

Day 7: Wittenberg - Berlin
Depart Leipzig and proceed to Wittenberg (officially named Lutherstadt Wittenberg) for a guided tour. See the All Saints' Church (Castle Church) the site where The Ninety-Five Theses were posted by Martin Luther on October 31, 1517, the act that has been called the start of the Protestant Reformation. The church also contains the tombs of Luther, and Philip Melanchthon, Luther's right-hand man. Visit the City Church, a twin-towered Gothic church, where Luther preached the Reformation, was married, and baptized his six children. Also see the unforgettalbe Luther House and Museum, where Luther and his family lived. It is well-preserved and full of Reformation relics, including Luther's desk, his pulpit, and first editions of his books. Continue to Berlin for overnight.

Day 8: Berlin
Morning guided city tour of Berlin, featuring both East and West Berlin. See the remains of the Berlin Wall, the Soviet War Memorial, Unter den Linden, the Reichstag and more. Free afternoon to explore on your own. You may wish to visit the world-famous Pergamon Museum, which houses an extensive collection of ancient Greek, Middle-Eastern and Islamic art and architecture. Or perhaps a visit to the Deutsches Historisches Museum before your final dinner and overnight.

Day 9:
Transfer to the airport for your return flight.