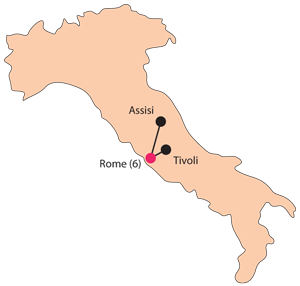 Day 2: Rome
Arrive Rome and transfer to your hotel. Get your bearings with a guided walking tour of some of Rome's iconic sites. Stop at the spectacular Trevi Fountain before continuing to the Pantheon, the world's best preserved Roman temple converted into a Roman Catholic church in the 7th century. Proceed to the Church of San Luigi dei Francesi to see the world-renowned cycle of canvases depicting scenes in the life of St. Matthew. Stroll through Piazza Navona, dominated by Bernini's Fountain of the Four Rivers and the imposing facade of Sant' Agnese in Agonia.

Day 3: Rome
A full day of sightseeing starts with a visit to the Vatican State for an in depth tour of the Vatican Museums and the Sistine Chapel, adorned by Michelangelo's great masterpiece, The Creation. Time to take in St. Peter's Basilica before lunch (on your own). Continue to St. John the Lateran, one of the five great basilicas of Rome, as well as the city's official cathedral. Enter the Scala Santa, the 28 marble steps which tradition claims were climbed by Christ on his way to be tried by Pontius Pilate. On to St. Mary Major, a Papal Basilica, to see the marian image in the Santa Borghese chapel reputedly painted by Luke the Evangelist using the wooden table of the Holy Family in Nazareth.

Day 4: Assisi - Greccio
Your full day guided excursion into Umbria starts with Assisi, synonymous with the life and works of St. Francis, and featuring the fabulous cycle of frescoes by Giotto. Also visit the Temple of Minerva, the Piazza del Commune surrounded by ancient palaces, and more. After lunch (on your own) continue to Greccio, where St. Francis of Assisi and his followers lived and preached for a time. Return to Rome for dinner and overnight.

Day 5: Rome
Today's subject is St. Paul. Visit the fourth of the Papal Basilicas, St. Paul's Outside the Walls, built over the tomb of St. Paul. Rebuilt following a fire in the 19th century, this huge basilica retains its original 5th century mosaics. Continue to Abbazia delle Tre Fontane, built over the site where St. Paul was martyred and an oasis of tranquility suitable for prayer and reflection. After lunch (on your own) proceed to the nearby Catacombs of Simitilla, the oldest of Rome's underground burial networks.

Day 6: Subiaco - Tivoli
A focus on St. Benedict, founder of the Benedictine order, starts with a visit to the Monastery and cave where he lived for three years, above the hill town of Subiaco. View the Grotta dei Pastori, thecave where St. Benedict met with shepherds to instruct them in the true faith. Enroute to Rome, stop at the hill-town of Tivoli for a visit to the Renaissance Villa d'Este and its world-famous water gardens.

Day 7: Rome
The Eternal City awaits you today! After viewing the spectacular mosaics of the Church Santa Costanza, a short walk down the Celian Hill brings you to the Colosseum and the neighboring Roman Forum. Proceed to the roots of Rome's Christian heritage, the Basilica of Santa Croce in Gerusalemme, orginally founded in the early 4th century by St. Helena of Constantine, mother of Emperor Constantine I, to house her passion relics. Final dinner and overnight in Rome.

Day 8:
Transfer to the airport for your return flight.