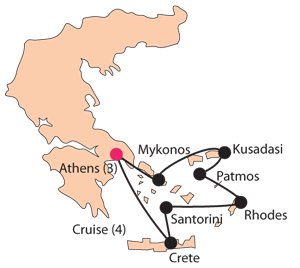 Day 2: Athens
Arrive Athens airport and transfer to your hotel for check-in, before dinner and overnight in Athens.

Day 3: Athens - Corinth
Start the day with a guided city tour of the Cradle of Civililization, Athens. See the Academy, the University and the Parliament with the Tomb of the Unknown Soldier. Continue to the Acropolis, for a visit to the Parthenon, dedicated to the goddess Athena, and the Acropolis Museum. On the slopes of the Acropolis, visit the Areopagus on Mars Hill, site of Paul's address to "the men of Athens" about their "unknown God" (Acts 17). After lunch (on your own) board your coach and travel along the Saronic Gulf, along the same route that the Apostle Paul took. Continue to Old Corinth where Paul addressed the Corinthians. Corinth was an important place and congregation in Paul's odyssey (Acts 18 and Letters to the Corinthians) with its Temple of Apollo ruins set against the Acrocorinth, on which the Temple of Aphrodite was located. Corinth was the largest, richest, and most pleasure-loving city of Greece, so it gave Paul plenty of material for discussion when he came here in the 1st century AD. Paul worked here three years with Aquilla and Priscilla. Return to Athens for overnight.

Day 4: Athens
A free day in Athens to visit Syntagma Square, snack on a gyro, or shop in the lively Plaka.

Day 5: Cruise - Mykonos
Transfer to the port of Piraeus for embarkation on your cruise ship. Sail to the island of Mykonos with its breathtakingly beautiful whitewashed buildings and churches. Wander through the many side streets with homes above the shops and numerous outside waterfront cafes ... a lovely respite.

Day 6: Patmos - Kusadasi
Early morning arrival at the Island of Patmos. Optional excursion to visit the traditional Grotto where John received the Revelations while in exile, and St. John’s Monastery atop the island. This afternoon, sail to the Turkish port of Kusadasi, the doorway to Ephesus and rich ancient history. Paul labored and ministered here for three years, and famously spoke at the Library of Celsus. Optional excursion to visit ancient Ephesus, a marvelous archeological site and base for much of Paul's missionary work (Acts 19 and Letter to The Ephesians), Also see the reputed home of the Virgin Mary - John is said to have brought Mary here. Time permitting, wander through the famous Turkish bazaars of Kusadasi.

Day 8: Cruise - Rhodes
Morning arrival at Rhodes, the Island of Roses, famed for its historical Old Town, home of the Colossus, one of the Seven Wonders of the Ancient World. The Isle of Rhodes is where the Crusaders gathered before sailing to the Holy Land, and where remnants of the Crusades remain. Optional excursion to Lindos and its legendary Acropolis. Walk through the Medieval Castle of the Knights of St. John. Then visit Lindos, where Paul landed in 51 AD on his way to Rome, and the Acropolis of Lindos, site of the Temple of Athena.

Day 9:
Disembark for return flight or opt to extend your stay in Athens.